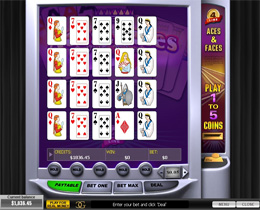 A definite favourite amongst the online poker games is 4 Line Aces and Faces Poker which as its name suggests you will be playing 4 hands in each game.

Choose the amount you would like to bet for each hand. The minimum bet is $0.20 per game and a maximum bet of $100 may be placed per hand.

The pay out for a Royal Flush with a minimum bet is 500 coins whereas with a maximum bet the pay out is 4000 coins. The best option is to place the maximum bet regardless of the coin denomination.

You are dealt 5 cards from a standard deck of 52 cards which is shown on a four hand grid. All four hands show the same starting cards. The bottom row of cards is your playing hand. You can hold or discard from this hand. The idea is to hold as many cards as you want in order to make the highest pay out combination.

Each hand uses a new standard 52 card deck and each hand holds the same cards as the bottom row hand. The remaining cards are drawn in order to complete each hand from the separate decks. The highest combination is paid out for each hand.

Play 4 Line Aces and Faces Poker at the Casinos Below